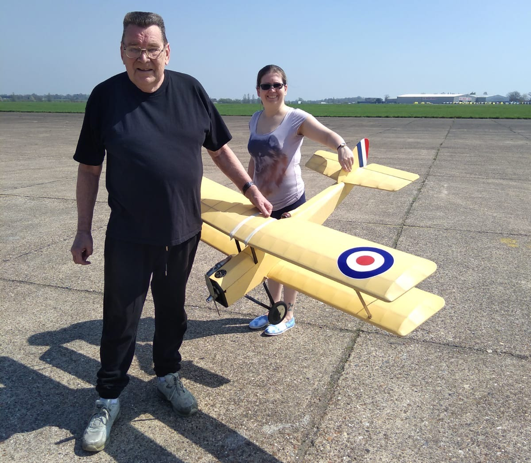 Whilst searching through some old photographs about 18 months ago I came upon an old picture from 39 years ago of daughter Helen and I with my then new DB Mannock biplane. For those of you that may not be familiar with the initials DB, they represent the late Dave Boddington who back in the day was a prolific designer of traditional balsa-built models and producer of model kits under the “Sport and Scale” brand. Now it has to be said that the plans and kits all had one thing in common, they all flew great!!

I decided to turn back the clock and built a new version of the Mannock, yes with a new owner DB are still going strong with a range of model kits and plans so I duly ordered a plan pack that comes with the plan and pre-cut wing ribs and additional templates.

The new model went together very easily and in no time at all the model was complete, I did use the undercarriage off my old Mannock and also I would see if I could get the 39 year old Enya 60 to fire up. Unfortunately, I had to buy a new glow plug, the expense of it all haha!

With a little help from Perry and John Lambert we managed to get the poor old engine to fire up and sort of run albeit with a load of thick black oily residue pumping out the exhaust! A few weeks passed and come the day of the test flight Paul Taylor stepped up and again the old Enya 60 was running and with no other excuse the Mannock was taxied out and off it went.

I was pleased with the handling and with only 3 channel control the model was a delight to fly, just as I remembered it. I took advantage of Pauls offer to rebuild the engine and during the last lock down he fitted new bearings and gave the engine a good clean up, you can see from the state of the bearings that this was well overdue. All those years of using straight castor fuel had really taken its toll and the nitro had set the rust off from god knows when.

Inspired with the whole nostalgia feeling I decided to see if I could find an old 35 mhz radio to fit in it and managed to find a new Sanwa 4 channel on Ebay that I hope to fit after a few more flights with my dear old Mannock.

So what else happened over 39 years? Well daughter Helen is older and I am wider! Such is the passage of time!

For anyone interested in all balsa built old time kits DB Sport and Scale have a website. https://www.dbsportandscale.com

All the best, Ted.