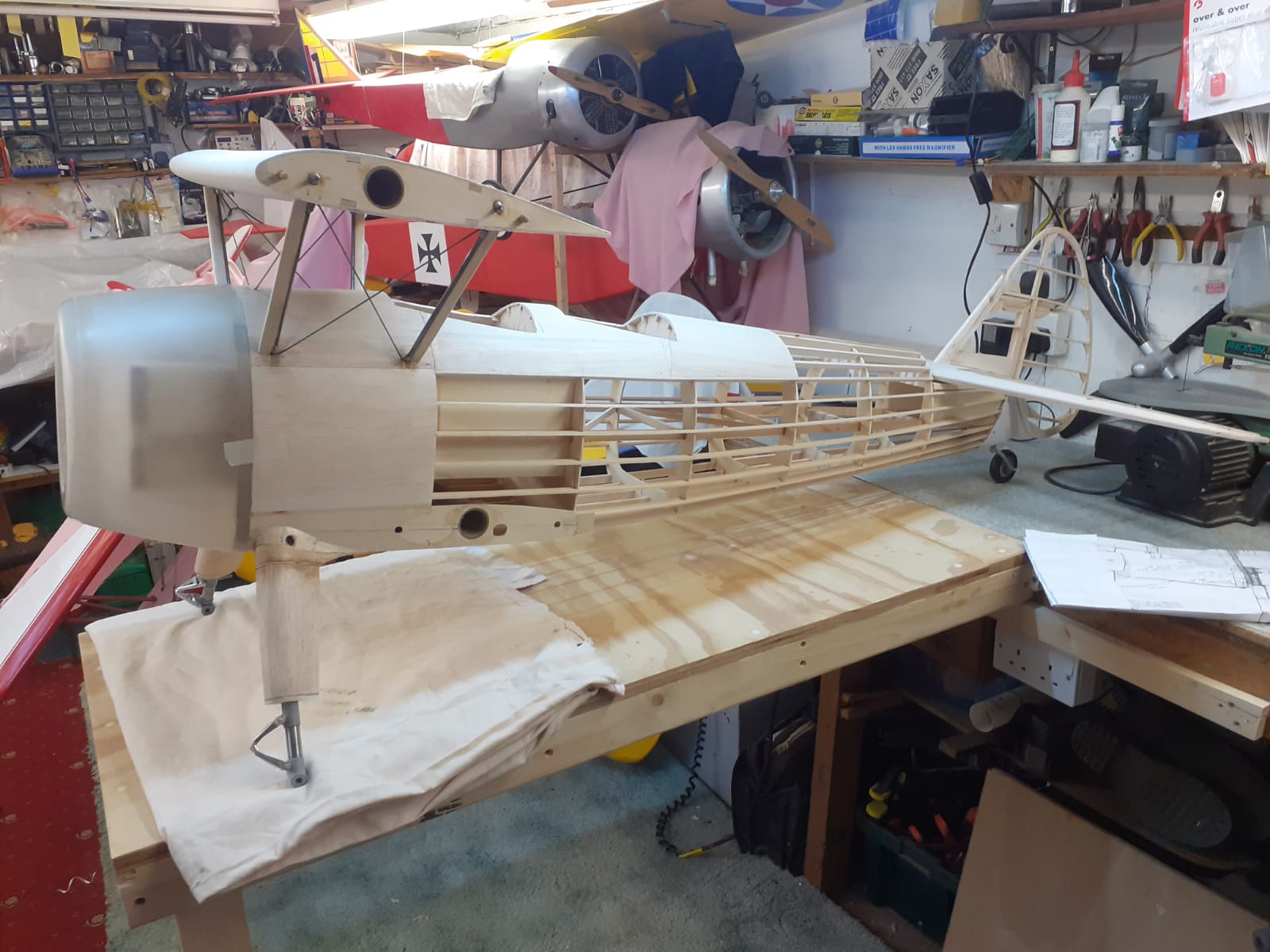 As some of you may well know I have been building a Boeing PT-17 Stearman since roughly July 2020. I started by researching and ordering the plans, cowl and undercarriage from USA. The plans are from the well know plans producer Nick Ziroli which many of you keen modellers will know!

I started by examining the plans and making a list of the materials that were needed for the build and then began to trace over the plans to make a copy of all of the ribs and formers needed using tracing paper. This process takes a long time in the fact that each rib is cut out by hand using a scalpel there are over 80 ribs! The fuzz formers were cut on a band saw or scroll saw depending on the type of former to be made.

After building a secondary bench to allow the model to sit on as being build I began by assembling the fuselage.

The photos detail how the model began to take shape as the fuselage was completed and the tail plane made. Once I had completed these I moved onto the wings most of my materials were bought from Balsa Cabin as they aren’t too far from where I live. After completed the wing panels it was time for an initial test fit just to see how well the top wings and bottom wings mated with the fuzz.

The fit was very good and overall, I was pleased with the build so far and originally intended to use a Zenoah G-62 power plant – more to this later.

Now the majority of the woodwork and building had been completed I began to cover the model in oratex antique covering and yellow for the wings. The covering is truly superb and one of the best materials you can buy on the market for a scale fabric finish – I used Active Models as the supplied for the covering as they provided excellent prices and customer service. Now it was time for spraying the model I went to a local car body shop to get the colours made up to my specification as you can see the livery shows blue tail plane and yellow wings with a light grey colour on the fuzz. The roundels were made from using solar trim and I used a template to cut them out to the size and scale I wanted.

Romeo did a wonderful job of welding me a custom muffler for my Zenoah G62 out of car body steel however after realising the amount of lead I needed in the nose and one thing led to the next and I decided that it was better decision to go with a radial saito fg-90r3. The craftmanship in the engine is truly superb and I am very happy with the purchase. Thanks to Peter Anderson for lending me his test stand to run the engine in and Romeo’s Temperature gun to monitor cylinders for overheating. I now also have the Kelo exhaust ring and have mounted the engine to the model ready for flying.

With help from my grandson, he has now programmed my DX9 ready for its maiden flight which I look forward to soon.

I hope to take the model over to the weald one day where there is a full-size version of the model and would like to get a photo of the pair together. Overall, I am very pleased with the build and look forward to flying it when lockdown ends. If anyone has any questions on the build feel free to ask me over at the field when we get back to our sunny fun filled sport.

All the best for now, John Lambert.